Message from the Ambassador 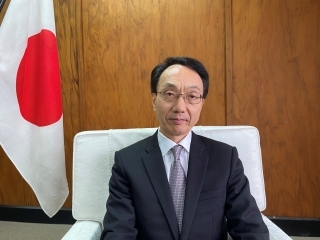 The Republic of Fiji possesses a prominent position amongst the Pacific Island Countries. Fiji’s Presidency of the 23rd Conference of the Parties (COP23) to the United Nations Framework Convention on Climate Change and its continued contribution to the UN’s Peacekeeping Operations, not to mention its star status in Sevens Rugby, significantly marks Fiji’s global presence.
Japan and Fiji have developed strong friendship since Fiji’s independence in 1970. In order to mark this milestone accomplishment, both countries celebrated the 50th Independence Anniversary of the Republic of Fiji as well as the 50th Anniversary of the establishment of diplomatic relations in 2020. The relations between our countries continue to strengthen every year and I am very pleased to highlight that today Fiji is one of the closest partners of Japan in the international stage.
I had the honour to present my credentials, to His Excellency Major-General (Retired) Jioji Konusi Konrote, President of the Republic of Fiji in January 2021. At this occasion, H.E. President Konrote conveyed to me the following gracious words, “Japan is a good friend and I am thankful for the generous assistance so far from various aspects. ”

I earnestly look forward to doing my utmost in strengthening friendship with Fiji, Kiribati, Nauru and Tuvalu by promoting mutual understanding, people to people exchange, development cooperation, trade and investment, and other key areas. I extend my best wishes and look forward to working alongside all of you in these endeavors.

February, 2021
H.E. Mr. KAWAKAMI Fumihiro
Ambassador Extraordinary and Plenipotentiary of Japan
to the Republic of Fiji